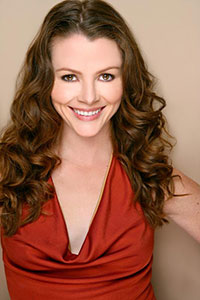 Melissa Sandvig was born and raised in Orange County California.  She began her ballet training at Long Beach Ballet at the age of 5 and began dancing professionally at age 15.  Melissa was also a young actress and starred in commercials and afterschool specials, but soon chose to put that on the backburner to fully commit to her future as a ballerina. While still in high school, she won 2nd place in the prestigious Music Center Spotlight Awards and toured internationally with the Los Angeles Classical Ballet to Taiwan and China. After graduating she was recruited to join The Milwaukee Ballet where she danced soloist roles with them for 6 seasons. Melissa then returned home to Los Angeles to become a freelance artist and a certified Pilates instructor.  Her interest in Pilates came after suffering a fracture in her lower back which caused her to retrain her body and posture to protect her back from future injuries. She enjoys teaching younger dancers how not only to be healthy but to work their bodies correctly to prevent injuries. “After first meeting Laura Gorenstein Miller while working with Milwaukee Ballet, it was a matter of destiny that they reconnected in Los Angeles. Melissa began working with Helios in 2004 where she used her ballet technique but trained under Laura and her veteran dancers to become the versatile dancer she is today.” Melissa continues to perform with companies such as Helios Dance Theater, Sacramento Ballet, Los Angeles Contemporary Ballet, Luminario Ballet, Motion Tribe, Strange and Elegant Dancers, String Theory, The Los Angeles Opera, and many more. She is most well known for her performance on Season 5 of “So You Think You Can Dance” as the “Naughty Ballerina”. Melissa was the first classically trained ballerina and the oldest contestant at age 29.  She broke stereotypes about age and ballet and made it all the way to the top 6.  Now she continues to perform, teach master classes, independently as well as with Velocity Dance Convention, Dance Excellence, VIP, and West Coast Elite. Most recently you can spot her as one of the ballerinas in Taylor Swift’s new music video “Shake it off” choreographed by Tyce Diorio, as well as on Nappytabs “Harlem Hopscotch” Video.  She has been a guest dancer on the hit show “Glee”, “Bunheads”, “Vegas”, “Dancing With The Stars”, “America’s Got Talent”, “Mobbed”, “Grey’s Anatomy”, “Hart of Dixie”, “The Young and the Restless”, a Microsoft Tablet commercial and continues to perform her piece about breast cancer “This Woman’s Work” with Ade Obayomi for fundraisers and events everywhere.  She has also performed in motion capture work for many of the “Shrek” movie dance scenes “Puss in Boots” and “Madagascar 3”, and has worked with Cirque Du Soleil and Disney to create a new show.  She can also be found on the Youtube channel DS2DIO and the webshows EHOW and HealthyPowerTV. She was chosen to perform as the principal ballerina in the Hit Off Broadway Musical “Silence” opening in Los Angeles. Melissa married Erik Sandvig in ’05, a childhood friend that she grew up with at her local church.  Erik has been such a blessing and so supportive and is known by many as the “sign guy” in the audience of “So You Think You Can Dance”.  They welcomed their son the summer of 2013 and she continued to dance and perform up until she was 7 months pregnant with Helios Dance Theater and also on an Episode of Grey’s Anatomy.  Now that she is expecting her 2nd child she continues to perform but is focusing on her teaching and choreography. Melissa’s contemporary ballet choreography for groups and solos continues to be competed in NYC for Finals of Youth America Grand Prix, and competitions around the US.