‘Heroes’ is a 2-D, virtual reality, and augmented reality project, which premiered at Sundance Film Festival in 2017. Wearing VR & AR headsets, users become immersed in a fiercely athletic and romantic dance that permeates an extravagant movie palace where silent films were once shown – the Theatre at the Ace Hotel in Downtown Los Angeles. The multidimensional experience lets users chase dancers around a pool and on stage, scale through a labyrinth of stunning architecture, and even reach out and hold dancers in their hands.

The 2-D version of the dance is available for viewing at the link above. To view the VR version, download it for free here.

Director Melissa Painter was recognized for this project by Microsoft as part of the Shiift Spotlight campaign, highlighting underrepresented voices in immersive technologies.

With The Support Of: the Ruth and David Coleman Foundation, Unity Technologies, Oculus, Nokia Ozo, The Theater at Ace Hotel, House of Moves, MxR Labs

Whether in real life or mixed reality, HEROES (and Minor Obsessions) proves that fundamental art forms like dance won’t go away with the advent of VR. Emerging platforms just give experiential control back to audiences, encouraging individual interaction as well as collective ones, all while exploring mixed reality’s uncharted terrain and redefining the art of storytelling.

In the burgeoning world of virtual reality, storytelling is both cutting-edge and old-fashioned

The idea of a dance performance that can happen in a room only for you, and customized to your (sometimes surreal) specifications, prompts conceptual questions: about the relationship between performer and audience, between disembodied VR consumer and the qualities of physical performance.

“Dance and sports, as two forms that have never let go of the idea of extreme human physical/athletic potential, have a lot to teach us in this moment about the importance of being embodied,” Painter said, “They can help remind us how to design technological experiences and entertainment experiences that don’t divorce us from our minds or our bodies.” 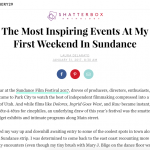 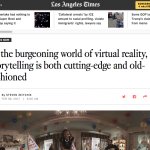 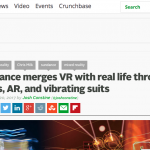 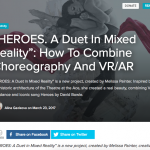 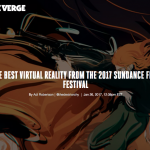 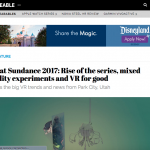